Note: This review is free of spoilers and based on my experiences with the PC version of Batman: Arkham Knight

The story of Arkham Knight

Arkham Knight combines both familiar and new elements of Batman lore. The gist of the story this time around is that after 9 months since the Joker’s death, Gotham’s criminal world is experiencing a power struggle in which Scarecrow partners up with a mysterious new figure known as the Arkham Knight to seize control of Gotham.

When you make your way through the 12 hour story line, you will recognize familiar themes from previous Batman novels as well as new ideas for the series. Many familiar faces make an appearance, both friends and foes. Your favorite villains are all here including Penguin, Two-Face, Harley Quinn, and more. Same with your friends, we get to have face to face conversations with the likes of Jim Gordon, Barbra Gordon, Tim Drake (Robin) and Dick Grayson (Nightwing). There are even some moments in the game where you team up with Robin and Nightwing to tackle the most challenging of encounters.

Because this is a spoiler free review, I will not go into detail about what happens in the later stages of the game. I will say this though, I did enjoy everything that happened. The best way to describe it would be a rollercoaster of thrills and revelations. 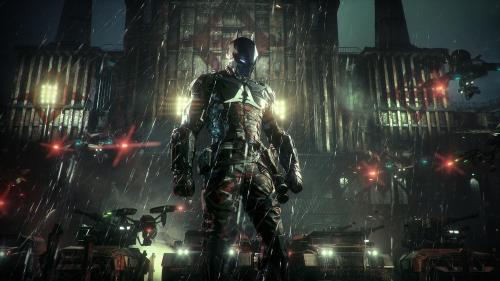 The world of Arkham Knight

The map that players occupy this time around is the largest and most detailed it has been to date in an arkham game. No longer are you stuck on an island or in enclosed section of Gotham. In Batman: Arkham Knight, you get to fly and drive all over the entirety of the Gotham and the 3 islands that make up the city. Many of the well known landmarks and buildings of Gotham can be found including the GCPD station and Wayne Tower. The only place I would have liked to explore would be the Batcave, but unfortunately it is not present in the game from what I have seen.

Besides the story, there are many side missions that you can find to do around the city. The classic riddler trophies are back and just as hard to collect this time around. Other missions include solving the perfect crime, training an ally, and others you will discover as you progress through the main story.

The gameplay of Arkham Knight:

The fast paced combo centric combat that became very popular as a result of the previous Arkham games are back yet again. This time around, Rocksteady has done a marvellous job polishing the combat. In Arkham Knight, the hand to hand combat is the most satisfying and exciting of the whole series. Many fan favorite combos have returned as well as a plefora of new moves for players to experiment with. One of my personal favorite new features would be the fear takedowns which allow Batman to isolate 3 to 5 enemy thugs and perform chain takedown on them.

A lot of Batman’s gadgets are returning as well. Classics like the batarang, grappling hook, and hacking device are all here as well as new tools like the voice changer. Most of the tools can be integrated into the hand to hand combat for more impressive combos.

One of the new additions to the series is the iconic Batmobile. It is both the best and worst thing about the game. The reason I say such a thing is because of the focus put on the abilities of the machine. There are 2 modes the Batmobile can operate in, I will call them car mode and tank mode. Car mode is fantastic, you feel like like Batman driving very fast through the streets of Gotham. The controls in car mode are smooth and precise enough to get around tight corners without much trouble. Tank mode on the other hand was the biggest issue I had with Batman: Arkham Knight. Tank mode turns the Batmobile into a slow moving armored machine of death. Normally that would be awesome, but it does not align itself well with the character of Batman. Even though the enemies you fight while in tank mode are supposed to be unmanned drones, Batman is still destroying parts of Gotham and shooting other people with rubber bullets.

I would not have had much of a problem with the batmobile if it wasn’t for the fact that Rocksteady placed a massive emphasis on vehicle being the main tool for solving every problem. I am not exaggerating when I say that I probably spent over half of my 12 hours with the game at the wheel of the Batmobile, most of that being tank mode sequences rather than car mode sequences. When it comes to solving a puzzle or getting past an obstacle, chances are high that the solution is the batmobile. Broken elevator? Use the winch on the batmobile. No power in this building? Use the batmobile’s engine to jump start the generator.

Not only is the batmobile the solution to solving all the problems, but when it comes to boss battles, there hardly any where you fight as Batman. Most of them are vehicle vs vehicle battles. I did not even realize that some of these were boss battles until I was around 50% of the way through the story and remembered I haven’t had a traditional boss battle yet. There are also many times in the game where you will be forced to fight in tank mode against what seems like a never ending number of enemy tanks because you are tasked to defend a crucial point of interest.

If you were thinking of playing the Xbox One or PlayStation 4 versions of the game, this bit does not apply to you. This part is just about the state of the PC versions as well as the troubles it faced on launch.

The PC version of Batman: Arkham Knight is a mess, to put it bluntly. The benchmark expected from developers when it comes to how a game looks and feels are much higher than the console versions. When Arkham Knight came out, PC players were horrified to find the many common settings and features found in just about every other PC game were absent from Arkham Knight. Instead of being able to change how the game is processed and rendered, PC users found themselves locked out of being in control.

The game was locked to 30 frames per second (fps) which is very poor playing fast paced action games, like arkham Knight for example. Players could increase the frame rate by going into the files of the game and manually editing a text file. By doing this, it cause many problems with other parts of the game, mainly with the physics of the game going out of sync.

Other problems found in Batman: Arkham Knight included random crashes and horrible memory leaks. When software experiences memory leaks, the total space of RAM and video RAM are quickly filled to the brim with poorly managed data. Problems such as these are often taught to be avoided by entry level programming students. The fact that a mainstream triple A developer put out a product on par with an amateur is rather insulting.

The outcry from the poor performance was not unheard, as Warner Brothers issued a statement the day after the game’s release in which they announced that they would be ceasing online sales of the PC version of Batman: Arkham Knight. *The announcement can be found here* It is not often that a publisher stops selling a product only a day after release due to how poor of an experience the game was for many fans to play.

Condensing this review is not easy to do. The story is both familiar and new with a satisfying ending. The hand to hand Batman combat is the best of the series. The batmobile is part awesome and part a chore to use, mostly because the tank sequences do not feel like they belong in a Batman game. The boss battle are probably the weakest of the series, they were all fairly easy and forgettable. The side missions are all on par with those found in Arkham City and will keep you occupied for awhile.

When comparing Arkham Knight to the other Arkham games, I feel somewhat disappointed. Many aspects of the game are well polished and were almost enough to pull Arkham Knight ahead of the others. The problem is that there is a lot of weight that keeps Arkham Knight down from the pedestal that it could easily have reached. Arkham Knight is not a bad game (unless you play on PC, but I will ignore that for now). In fact, Arkham Knight is one of the better games to have come out in 2015 so far, it is just not good enough to stand out from the crowd of upcoming titles. With that said, Rocksteady tried to change the formula a bit too much for what was supposed to be their Batman swan song.