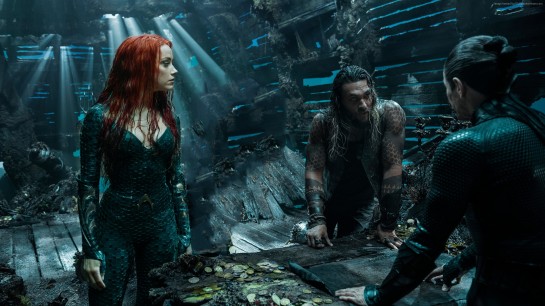 It feels like an eternity since Justice League landed with a thud last November, the film that introduced us (officially) to Jason Momoa’s Arthur Curry. Irrespective of your opinion on that film (I still watch that movie with a stupid, childish grin on my face, despite its flaws), we all knew coming out of it that the landscape of DC on film was going to be changed forever.

The Snyder era, in practicality, was over (The Snyders are listed as producers for Aquaman, but likely had very little creative control). Aquaman is the first true post-Snyder DC film and the first film who’s post-production (and some production) overseen by Walter Hamada. This is the new DC Films, for better and worse.

By the time my “early” screening started, it felt like everyone in the world had already seen the film. In fact, it had already become a smash hit in China and had many screenings around the world. The word-of-mouth on the movie felt really strong, but the critical reception was lukewarm. Heading in, I wasn’t entirely sure what I was in for.

Ever since Geoff Johns took over the book in 2011 at the beginning of the “New 52” era, Aquaman has remained at the top of my favorite comic books. There’s been something exciting about the character for me for some time, and I have long wanted to see what the world of Atlantis would look like on the bigscreen. Finally, James Wan has brought this dream to life.

Aquaman looks gorgeous. Yes, it’s a CGI heavy film, but there’s probably a good reason for that. Rumor has it that Jason Momoa and Amber Heard are not actually fish-people. Once we accept the world, then hopefully we can acknowledge just how well crafted it is visually. But CGI always has a way of drawing criticism, warranted or not.

The cast of Aquaman, from Momoa’s Arthur to Heard’s Mera, and from Wilson’s Orm to DaFoe’s Vulko, are all pitch-perfect castings and seem to have good chemistry. It is an overused trite of film criticism to say that actors seemed to have a fun time making a movie (who cares? So long as it’s a great performance, they can be miserable for all I care), but Momoa had an energy about him that was absolutely infectious, and Heard played Mera with a light-hearted royal air.

Aquaman, however, squanders its cast’s chemistry with some fairly cliche’ emotional writing. There’s nothing wrong with a conventional Joseph Campbell-esque hero’s journey, but the writing needs to be less conventional and on-the-nose. Too often, David Leslie Johnson-McGoldrick and Will Beall’s screenplay held the hand of the audience through emotional beats, and some of these beats were delivered in flashback, without our heroes. Much of the humor falls flat as well, which falls square at the feet of the screenwriters The break-neck pace of the film and the consistency and quality of the action make up for much of what is lacking in the screenplay’s dialogue, but script-wise, it may be the weakest of these DCU films for me (remembering, of course, that I haven’t disliked one outright yet).

That hero’s journey is well-plotted. Arthur’s journey from reluctant hero to king is about as classic as it gets, and is a quintessential part of who this character is. He shows us that being heroic isn’t about whether we are worthy of our heroic stature, but it’s about what we decide to fight for–ourselves or those around us?

In a better world, this would have been a two-part film, giving some of the ideas and character development room to breathe. But because superhero movie sequels are not a guarantee outside of the mighty MCU, this film had quite a bit of ground to cover. The result is a fast-paced, wacky, and action-packed adventure. For the most part, it’s fun. It brings a comic book character to life in a way that I had not thought possible. Wan certainly deserves a chance to direct the sequel, and all signs point to him getting that chance. Aquaman is poised to become Warner Bros.’ biggest box-office superhero success since The Dark Knight Rises, but even if it falls short of that billion dollar mark, it should land happily in the neighborhood of Wonder Woman‘s $822 million dollar hull. The new DC Films is here, boys and girls. Let’s hope it sticks around.